Join my newsletter list to be the first to hear our latest news! Learn More
Home / Parks / Different Disney Castles Around The World.
84 shares

Different Disney Castles Around the World.

Different Disney Castles around the world come in different designs, shapes, and sizes. There really are magic kingdom castles all around this beautiful planet. All of which have been inspired by an original animated film. Stories of true love with magical royal banquet halls set in Walt Disney World. From the magic mirror to a haunted mansion there is something for everyone at a Disney theme park and the castles from the Disney movies really have become a Disney classic.

I have put together some statistics and facts about all six Disney Castles. They really are the Disney Park icon and have become a timeless tradition within Disney. From Snow White, The story of Cinderella, tales of Tiana, Prince Eric, Prince Charming even the Little Mermaid all have beautiful castles with the Disney magic we all know and love.

There are some amazing and stunning Disney Castles and around the world, there are some Different Castles to be seen. Some even have a bibbidi bobbity boutique inside for your little Princess to have a Princess makeover to wow guests and cast all over the parks.

More to compare the styles and design than to compete. So in chronological order of opening date for each of Disney’s castles, some interesting facts here is my list and some fun facts about the castles, so which one is your favorite castle. 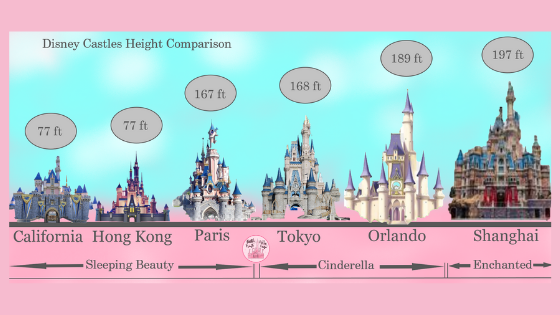 Disneyland California Situated in Fantasy Land Anaheim California The Sleeping Beauty Castle was first built by Disney and opened in 1955 and closed for refurbishment in 2018 and is now called Castle of Magical dreams (however Sleeping Beauty Castle will probably always be in our hearts). It was also the first time a storybook castle was to be used as a centerpiece in a theme park and is fully in plain sight so the look of the castle had to be a unique experience whilst still being a focal point as one of the most famous  Princess castles.

The design of this castle and that of the one in the film Sleeping Beauty are very different, the name however came due to the walk-through section being based on the Sleeping Beauty story. It is actually only 77ft (23 meters) tall; however, the design cleverly leads you to believe it is much taller. Although the Castle had an upper level it was left empty by the designers and Walt himself challenged his Imagineers to find a use for space.

The walkthrough part of the Castle opened in 1957 and was closed in 2001 for unspecified reasons; however, the walkthrough re-opened in 2008 to lines of people as far back as the main hub of the park.

Possibly the most famous example of a Disneyworld castle and my special place, but only the second tallest with its blue spires at 189ft (58 meters) Disney’s Cinderella Castle in The Magic Kingdom Park Orlando Florida is a wonderful spectacle of engineering and design. The castle was completed in 1971 and the height is based on the water level in the Moat that surrounds it, however, if you take the depth of the moat to actual ground level then the castle is actually 6ft taller than stated (just to be pedantic). Within its walls is a real-life royal residence that is usually reserved for extra special guests.

This truly is a fairy tale castle; you can eat at Cinderella’s Royal Table and watch the fireworks from a dining table overlooking Tomorrow Land. As soon as you enter the courtyard entrance of The Magic Kingdom you get to feast your eyes down the length of Main Street U.S.A. and there in the distance you see your first glimpse of this imposing and magical castle. Make sure you get that photo with the castle as a backdrop, the front of the castle is awe-inspiring.

As the night falls you get to revel in the 16 million colored lights that illuminate the exterior. The Castle also becomes the centerpiece for the nighttime spectacular fireworks show as projections and lighting transform for your delight.

In recent years an addition has been made to the magic kingdom park, beauty’s castle, well actually beast castle, is to be found

Tokyo Disney Land 1983 saw the rise of another Cinderella castle, this one in Tokyo. Standing at 168ft (51 meters) it is shorter than Orlando however none less imposing. It was originally built as a near copy of the castle at The Magic Kingdom Disney World but has undergone a transformation; with a different color scheme and gold, trimmings to differentiate it from its predecessor. As part of its 35th-anniversary celebrations in 2018, the castle had fountains installed. There is also a new nighttime spectacular.

opened its Euro Disney Park (later to be re-named Disneyland Paris). In 1992 and we saw a second Sleeping Beauty Themed Castle. The castle’s French-styled architecture with elements of French Castles and monuments added to the Sleeping Beauty theme gives this castle a difference that defines its overall beauty.

I think this castle is probably one of the prettiest and really sets itself apart from the others. Standing at 167ft (51 Metres) it is the central icon that sits at the end of Main Street in the main park. The fireworks spectacular include some of the newer films like Frozen, Pirates of The Caribbean, and Star Wars and it truly is a must-see.

Hong Kong Disneyland First opened in 2005 the original Disney castle was based on the Castle at Disneyland California and stood 77ft (23 Metres) however this is the first and so far only Disney Castle that has been retired! Set to open in 2023 Disney’s Yesterland in the Honk Kong Park a new Castle will appear. It will become another Castle of Magical Dreams and is set to be 167ft (51 meters) so it will match Paris and Tokyo in height. A new spectacular will be presented and the design is set to astonish, so here’s to waiting! Park

China sees the largest castle of any Disney resort coming in at 197ft (nearly 60 meters) tall. Over 600 tonnes of steel were used in the construction and it has 27 towers, definitely a much grander scale. The moat holds nearly 3.4 million gallons of water. It represents all of the Disney Princesses and first opened in 2016. Its design is set so it represents the Castles from other parks and yet stands out on its own. The Disney Enchanted Story Book Theme is the setting for this beautiful, inspiring castle and still incorporates a Chinese element to it. There is even a boat-themed attraction inside this castle. It is as they say ‘Authentically Disney, Distinctly Chinese ’.

So, there we have a quick round-up of all the Disney Castles around the world.

I hope that you found it all as fascinating as me?

So, there we have a quick round-up of all the Disney Castles around the world.

I hope that you found it all as fascinating as me? 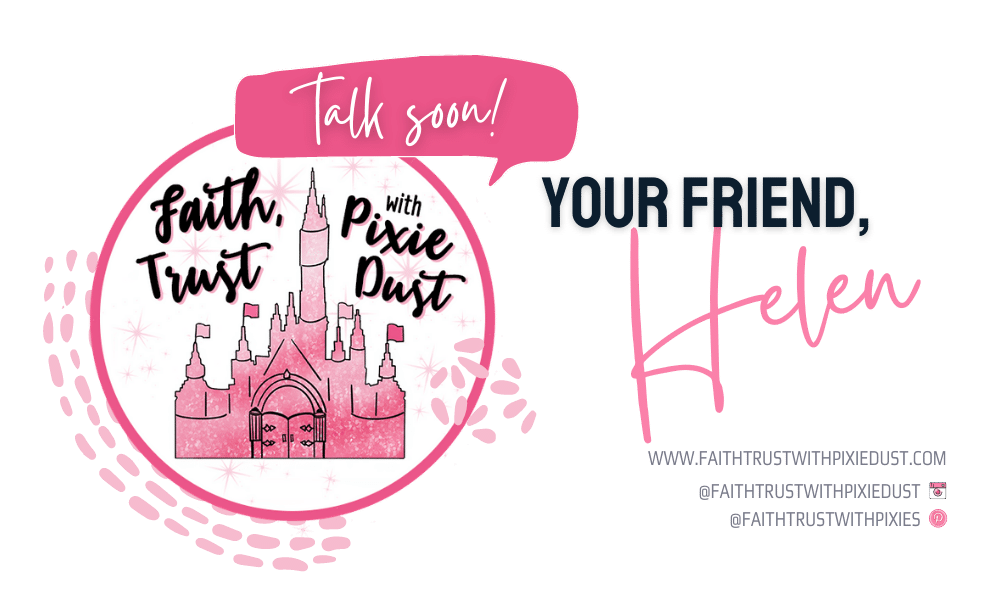